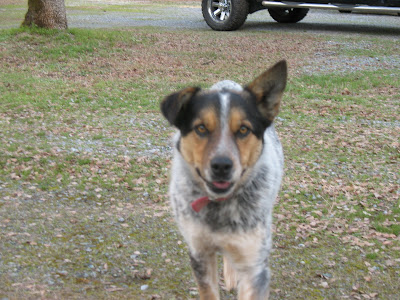 This is "Cort", my (our) new dog. Step-son could no longer keep him, so he has been confined in a kennel for a few months. He is a bit over a year old. He wears one ear up and one ear down. He seems to be smart and willing to please.... 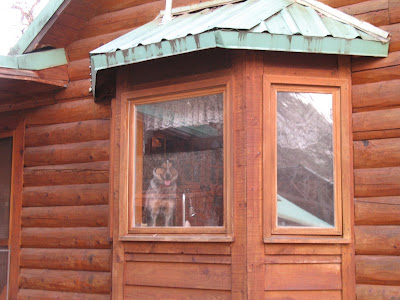 ....he just needs to learn the house rules. Such as ,'no jumping up into the kitchen sink to watch us outdoors'. He has bonded to me already, but then I have spent the past few days hauling him everywhere with me. He does like Jerry too, but Jerry has been busy with his new toy. 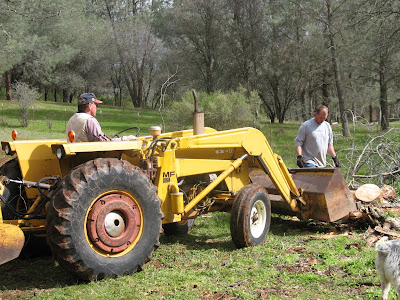 His new tractor; it digs, it lifts, it pushes, it pulls, it is cool.

It was new in the 70s. It belong to Jerry's Uncle, then his Dad bought it, his Dad retired from farming and then passed away, the tractor sold to a friend, when J.J. heard it was being sold again, he called Jerry and asked if he wanted to buy his Dad's old tractor. When you live in a 'small town' you know the whereabouts of your Grandpa's old tractor.

The tractor has been well taken care of and works hard.

I thought I had convinced Jerry that Sunday is a day of rest. I am in here doing laundry, dishes and just a general clean-up after having guests.

Jerry and Cort are outside..... not on the old wooden swing, I assure you. So much for resting.

I hope that your Sunday has been peaceful.
Posted by Kathy at 10:59 AM

so I did guess right , on Jerry's gift. Now your gift, real surprise. Cort looks good. I hope he learns, getting in sink is big NO NO.

I really would like a dog, but one that isn't to young or to old, one house broken, knows all the rules, gets along with cats, other dogs and people. I really don't want much in a pet dog, do I.

You must never go out or any place without your camera. Good, keep the pictures coming.
"Hi Jerry" Take care, XO

What a nice looking dog and how wonderful for Jerry to get a new toy. It sounds like you guys enjoyed your company! Have a good day.

That dog looks like a real kick in the pants! I look forward to reading about his adventures. I love that he got in the sink to look out of the window! And that doinky ear is a hoot!

Will Jerry let you learn to drive the tractor?!

Di, If I ever get the house, garage, barn, office together... I'll be out there on the ol' tractor.
jb, love that word -doinky-! And I am sure there will be adventures. Hope all is good with you.
Courtney, Thanks. One day soon, I'll get to that meme, is there a time limit?
Mom, yep you guessed it! Yesterday the silly beast opened the shower door and jumped right in with me. Life with Cort will be entertaining.