We've been busy getting things together and in place. The internet connection up here 'in the hills' is poor, we will have to do something about that. It took almost an hour to load the following two pictures. I have more but don't want to risk losing my entire post, which has happened several times.

I took a day this week and went skiing. It was a lovely drive, the snow is melting away now. But there was plenty of snow at the ski resort. It was too warm out to wear a coat, a sweatshirt was just right. By noon, the snow was getting slushy so I headed home. After five months, my leg that got squished by the horse, has finally healed. I had no problem with 2 1/2 hours of downhill. I love to ski. I missed by buddies Kevin and Tristan though! Maybe next year they can join me. Last year, my nephew Kevin and I braved massive blizzards to drive up to the resort. It was quite the adventure. 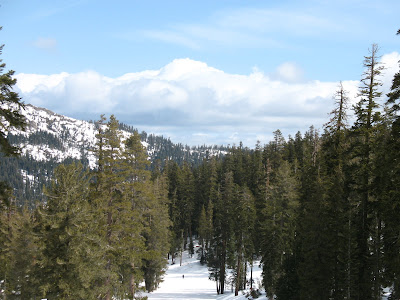 The day was warm, the skies dotted with just a touch of cloud, a bit of wind, and plenty of snow. 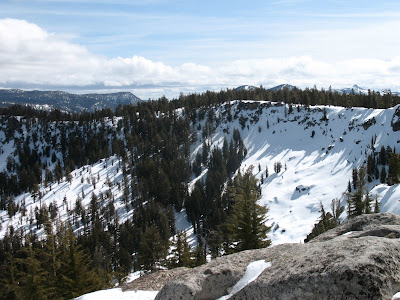 Doesn't this look fun? I was thinking about skiing around the edge over there and doing a bit of back country down hill skiing....

perhaps if one of those boys were with you they could persuade you to skiing dangerously. :)

Now thats what I call Skiing. Hope you get some more days in.DAVID

OMG I lived most of my life in California, those hills are so beautiful. Gorgeous picchas and really liked the wedding photos of boots.

Love the pictures, keep them coming. Beautiful place for skiing.
But, not that ridge, no way!

While I'm glad you had a grand time skiing, I can't say that I'm very happy to look at SNOW! I'm sick of snow. It can all just stay away until NEXT winter!

It does look pretty serene and pristine though, so the snow on the mountains DOES have that going for it.