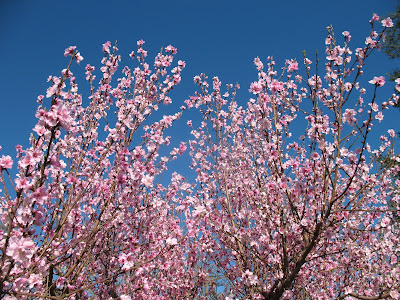 Time is odd. We've skipped ahead an hour, I am surprised to be through the first third of March already, and then I realize over half a century has zoomed by in a blink of my eye. Odd.
Thanks to everyone checking my blog and leaving messages. I am sorry not to have replied sooner. A week was spent working a vigorous schedule out of town, while hosting a very ugly upper respiratory virus. Then last week at home with the flu 'bug'. This week starts out with both of us in good health and Jerry working out of town for a few days.
I have tried to post a few times but have found the Internet connection up here in the 'wilderness' to be very temperamental, unpredictable, unreliable, challenging...... a good sense of humor is a must.
We love it up here. Our list of dreams for the place exceeds our 'best case scenario' expected life spans.
The resident wild-life situation is another challenge.
The deer are not pleased with the horses in their pasture and the new fences in place. They abandoned us for a while but are slowly adapting to the changes and venturing closer.
The creature chewing, pounding about, and leaving piles of 'droppings' in the attic has been banished and is angry. He is currently, at this very moment, sitting out in an Oak tree screaming (obscenities, I am certain). A large grey squirrel. I saw him scurry away last week and found two openings in the wall that he was using to gain access to his home, which is now ours and we aren't sharing with the squirrels. Jerry patched the holes. We listened in the attic for a few days to make sure we didn't hear any baby squirrels up there (none) and we have been cussed out by the Mad-One daily.
When we initially moved in, I had to remove the remains of several unfortunate birds from the wood burning stove before we lit our first fire. Well, it is spring time here. The birds are abundant and the love-sick birds are seeking nesting areas. A favorite spot explored is our chimney. They slide down the stove pipe, and hurray, arrive safely in the stove. Currently, at this very moment, there is another bird banging about in the stove. The drill is, I open the door with fish net in hand hoping to catch the little devils immediately. I fail. The feathered devils then fly back and forth across the high peaked ceiling. They fail to figure out the escape routes on their own. It takes two of us armed with brooms, hours to get the foul fowl out. Now there is another one trapped and I have to be the bird police on my own. I am tempted to leave it there for a while, let it weaken with hunger and thirst and then grab it. *sigh* I really won't do that.
This morning before leaving, Jerry was out studying the chimney, which extends from the very steep side of the roof. He was figuring a way to get up there to put a bird screen over the opening. He scares me, I have a vision... Jerry dangling from the roof, a rope tied around his waist, me hanging on to the other end on the other side of the house.... honestly though, the man would never allow a rope to be tied to him. *sigh*
Since he rarely reads this, just looks at my pictures sometimes, I'll tell you what he did the morning after he blocked the squirrel's doors. We woke early to the squirrel screaching at us, Jerry went out our bedroom door to the back deck, climbed up the edge of the house where the logs meet at the corner, climbed to the roof line to make sure the squirrel had not gotten past his metal patch job, and did all of that climbing in his under-shorts, his white briefs. *sigh*
I really do love it here.
To my 'blog buddies', I keep reading but am having trouble posting comments. Know I think about you!
To my family, yes I know I should call more often. On our good days we seem to be in bed by 8 pm. When we aren't ill, we are exhausted. But I think of you all daily.
To everyone, enjoy your adventures today!
Posted by Kathy at 10:19 AM

The time change COMPLETELY caught us by surprise, too. We had forgotten about it until Sunday afternoon when Hubs turned on the computer and found the time had changed on it. Thank goodness for automatic technology!

Too funny about Jerry crawling around on the roof in his tighty-whities! I just LOVE living in the boonies...you don't even have to bother getting dressed to do outdoor chores. I fed the horses in my PJs last weekend...and quite a sight it was. PJs, big muddy muck boots and a heavy flannel farmer coat over the whole ensemble. I was STYLIN'!

HELLO, GOOD TO HEAR FROM YOU AGAIN.
SQUIRRELS GOT TO LOVE UM. I HAD TO CHASE ONE OUT OF MY ATTIC ALSO.CHEWED RIGHT THROUGHT THE VENT ON THE SIDE OF THE HOUSE.PUT WIRE MESH UP BEHIND THEM NO MORE PROBLEMS.GLAD YOU ALL ARE FEELING BETTER. DAVID

Glad to have you back on. Hope you both stay well, been sick to long.
Isn't it fun living in boonies, all the little fun things you have to put up with. Hope you are now rid of most of them wild creatures.
Be Glad it wasn't a big raccoon who died up there and then comes through your bedroon ceiling on to your bed. "Hi Jerry"
Take care, xo

Jerry in his underwear is just too funny. I'm glad to see you back posting, I was starting to get worried. Have a great day!

Oh! You paint such a lovely picture... problems and all! Glad you are back to posting. Beautiful pictures of the blossoms by the way!

chasing birds out of the oven? why do that? it sounds like the next best thing to a microwaveable frozen dinner to me... hahaha

so...did the bird survive the night?? hope we don't have to wait to long to see beautiful trees like yours around here!

Thank you all for the nice welcome backs!

Tami, you must be a starving college student!

JB, good to see you. Hope all is well.

Dave, the squirrel has now decided to try to tear apart the attic fan covering, not successfully so far.

Mom I had forgotten that story,ugh.

Jenn, I think I have teenage pix of you in that same style.....

Courtney, I hope it wasn't the flu at your house?

Di, I have decided to ignore and thus not answer your question.....