Spending the day kayaking up the Wailua River, hiking jungle trails, and finally reaching the waterfalls was my favorite activity while we were on Kaua'i. I used a water proof disposable camera. The jungle was dark so my pictures turned out dark. The day was partially cloudy, sometimes full cloud cover. The weather changes frequently and quickly in Hawaii. 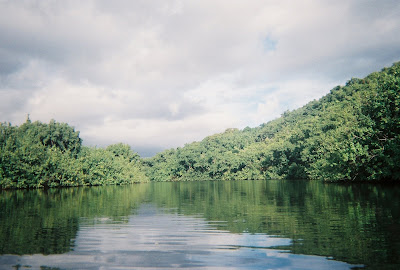 Close to the ocean, the river was wide and open, silky smooth and peaceful. 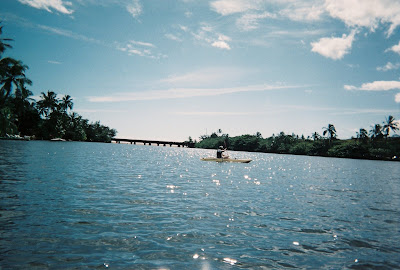 Beyond the bridge is the ocean. We put the kayaks in the water at a small boat ramp near the bridge. 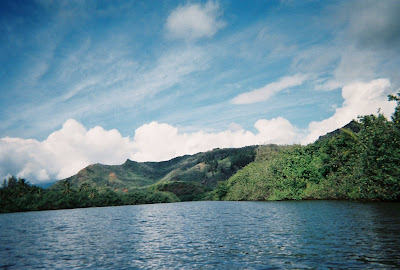 The clouds never cleared completely but we didn't mind. The weather was lovely. 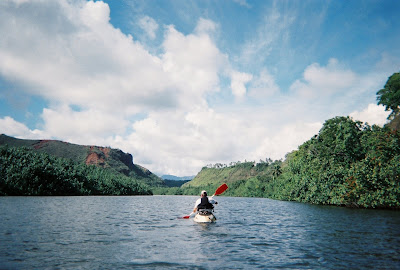 The further up river we paddled, the narrower the river became. 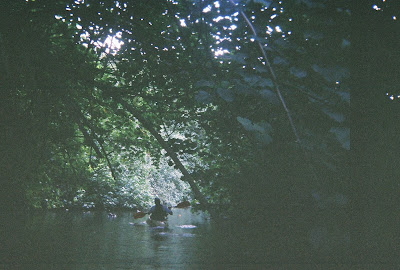 Eventually we were in tunnels of jungle trees. Paddling upriver was easy, the current was not strong. 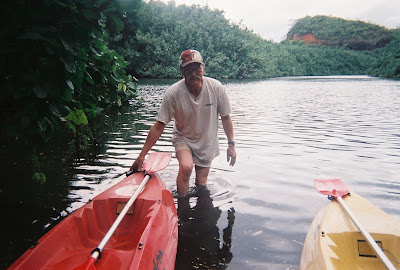 Here we landed and got out to visit the Fern Grotto. It was a lovely large flower garden; at one time. Now it is being destroyed by wild pigs rooting up the soil, trees and plants. A half circle of rock cliff was covered thick in ferns, before the dry spell, now the ferns remaining are brown and dry. We stayed for a brief walk through and I got no pictures. 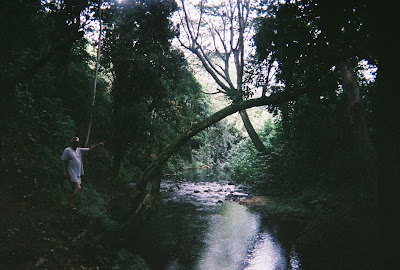 Eventually we reached our final landing site. We found the trail and headed into the jungle. It was dark, humid and warm; very warm. 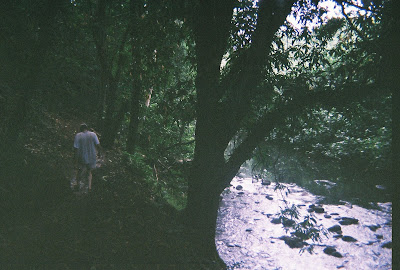 The trail was narrow and slick with moist mud. Much of the trail followed the river. 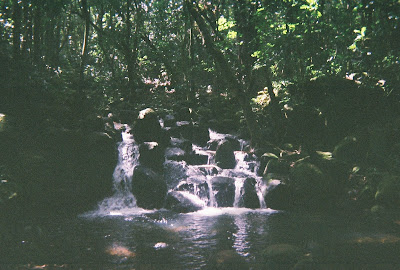 We passed these little falls and the trail forked. We agree on which fork to take, the one continuing along the river. As we hiked on, the trail became more narrow, increasingly wet, and suspiciously similar to a wild pig trail. We climbed on and on. The trail stopped, no warning just an abrupt end. It was a pig trail. We had climbed higher and steeper than I had realized as we had been trudging uphill. The hike down the narrow, slick, mud trail with a raging (at this point it seemed to be raging) river below was not pleasant. We made it to the fork without plunging to a watery death. I was emotionally and physically exhausted. 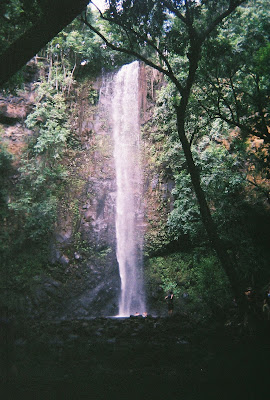 We made it to the falls. Those small spots at the bottom are people in the pool. A very high and beautiful waterfall. We didn't spend much time here, we figured we had just enough time to get back before nightfall.
I slept quite well that night.
Speaking of sleep, it's time to get to bed. I'll be heading home tomorrow and will be working in my home territory for a while. Back to the land of poor Internet connection, thus fewer pictures to share.
Thanks for joining me and sharing your thoughts.

I am so jealous. What gorgeous pictures. I am going to go throw a fit to my husband now about how he doesn't take me anywhere and I want to go to Hawaii! I think with all that's been going on I deserve a vacation!

How funny that you followed a pig trail! You're lucky you didn't run into any wild pigs...I've heard they can get pretty violent.

The kayaking looks like it was fun, and dude, you were in a JUNGLE!!! How awesome is that?! You definitely earned your sleep that day.

wow you all really know how to go exploring! Glad you didn't meet the wild pigs especially since you were unarmed! Can Jerry kill one bare handed? Those were the COOLEST photos out in the wilds of Hawaii. AMAZING!!!!!

Enjoyed the river trip and the climb into the jungle. Glad you didn't run into any wild pigs.
Sure sounds and looks like a great vacation.
Will miss your pictures.
Tell everyone at home "Hi, lov them all, xos"

It's always fun to get off the beaten path, but a pig trail? Yikes!!

Kayaking is on my "Return to Kauai" list. We took a boat cruise to the grotto and looked at the sad state of things.
Lovely pics -- thanks for sharing. : )