In his younger life, Jerry was a packer in Idaho. Using horses and mules, he packed deer, elk and bear hunters, into the back country to his hunting lodge. He also tamed wild mustangs. He is a horseman and rugged outdoors man to the core. The years went by, he found himself living the suburban 'good life' in sunny California; the outdoors... his green lawn, the horses... only in the cowboy movies he enjoys.

More than a decade ago, a rancher friend and fellow packer in Colorado, needed help getting his hunting camp prepared for the elk hunters. Jerry was on it, no hesitation, he's like that. Putting together a group of buddies from California, mostly city boys, most never on horseback, they set out for Durango. They became wranglers, cowboys, mountain men, away from "it all" for a week. They rode horses, leading mules carrying supplies up the mountain, to 'the cabin'. They repaired corrals, cleaned the cabin, put up tents, chopped down trees, split fire wood, engineered a system to obtain water from a spring, dug a toilet. They were hooked. It has become a yearly tradition; this trip of the City Slickers, the faces change occasionally as an extra man is invited or an old timer just can't make it. But the trip stays the same.

A woman tagged along.

I opposed the idea, the idea of one woman infiltrating the ranks of men celebrating their escape. Jerry insisted, went to all lengths to get me on this trip. I argued that it was a MAN trip. He emailed all the men asking if they minded me coming along, they all responded favorably. I am not dumb, of course they would say yes to the Boss-man, the one who gets them to the Colorado Back country. He's like that.

But another concern of mine, this vacation to go do work? Huh? Explain that to me please. I have horses here at home that aren't ridden enough for the amount of food they consume, there is work aplenty here at home, I have mountains practically in my back yard, I have all the camping gear needed to survive years in the wilderness, when I go camping my goal is to escape and relax. The cowboy assures me, I will have to do no work, just relax, enjoy the mountains, take a few pictures, and be in his presence. Oh boy. We all met in Durango, some flew in, some drove. Six rugged cowboys for the week. and me.

First order of business was grocery shopping. I just followed behind taking pictures and gulping at the amount of vittles being tossed in the baskets. It was disturbing to have folks stop and say howdy to the cowboys, and tell them it was good to see them back again. Now, I can shop somewhere weekly for a year and I am not recognised, what's up with that? I start wondering if they shoot up the town when they come back, get rip roaring drunk and get thrown out of saloons, or something else crazy. 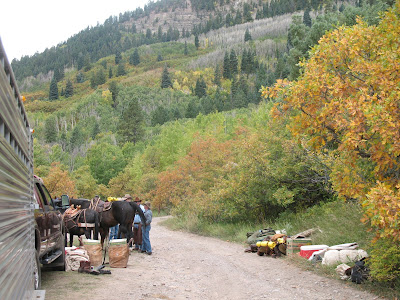 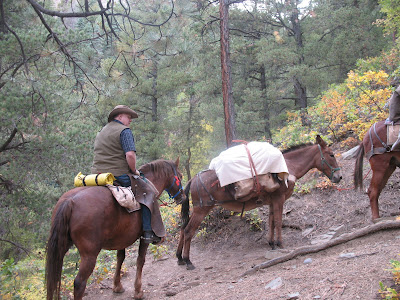 The trail was steep. We took frequent breaks to let the animals catch their breath and rest. Seven horses and five mules. The mules carried our bedrolls, our clothes, our food, chain saws and tools. 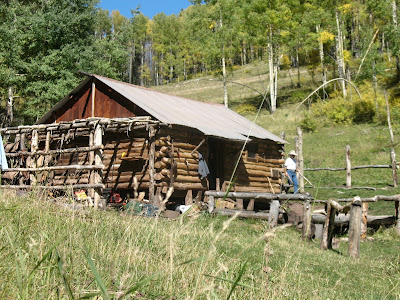 Rustic, simple, quiet. My home for a week. 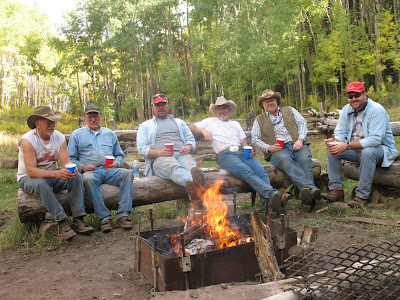 Rustic, simple, not so quiet, my companions for a week. 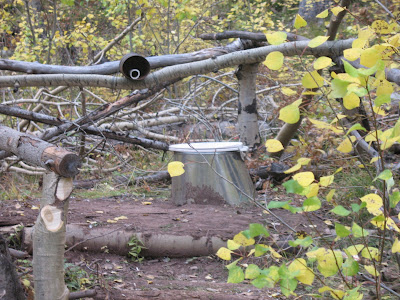 True my friends. No indoor plumbing. See the walls, the ceiling, notice the privacy... Exactly!

My plan: to only have to use the facility in the dark.
Result: total failure. 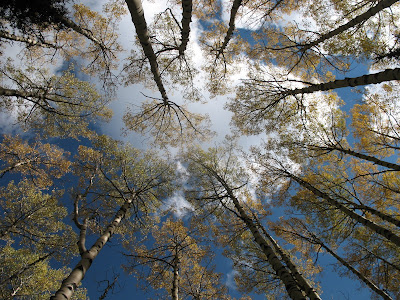 I LOVE the toilet! ROFLMAO! I think the boys should have dug a more private privvy for the lone woman.

What a fun trip that would be with a group of women, as a vacation, of course, not a working trip.

OH the MEMERIES! I can still see it like it was yesterday. I see the pics. from my trip every day. I have them on sceen saver. Looks like the same weather I had. I had to work. But it was the best VACATION EVER.

He He!!! Oh what fun! I love the pictures and lucky lucky you! I can only imagine the stories round that campfire. And don't you be all down playin' things. You were in the woods with 6 cowboys, how fun is that!?!?! Of course... that potty... ummmm... that would put a kink in things for me.

1st: is the word you were looking for for Durango Part One "Chauffeur". 2nd: Ditto Jen, ROFLMAO!

I like both sets 1 & 2 of stories and pictures, Fun to camp out and ruff it, in wilderness, even that great potty outdoors. :) Just to be there and enjoy all the beauty.

This looks just like the Moose Camp my brother's go on every year. They ride the ferry overnight then drive for 15 hours straight to meet up with the guys. Then they head out into the AK wilderness for 3 weeks.

Love the pics of CO!

That toilet was not for the faint of heart or the feeble. What a woman! I think I would've found some bushes to hide my butt.

didn't you show us that potty tree last year? Am I crazy? It seems like I remember it! Really.