Sharing a day at the 'office'.

On my way to the clinic, the receptionist called, alerting me to the first patient of the day. Female black Lab, 7 yrs old, in labor; a still-born pup at 3 a.m., no pups born since then.

Radiographs (Xrays) confirm more pups (lots of 'em!) and one 'stuck' in the birth canal. 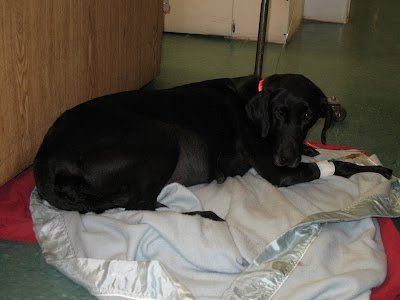 'Stuck pup' refused to be 'unstuck' with fingers or forceps.

Next course of action; Canine C-section. One of my favorite surgeries. 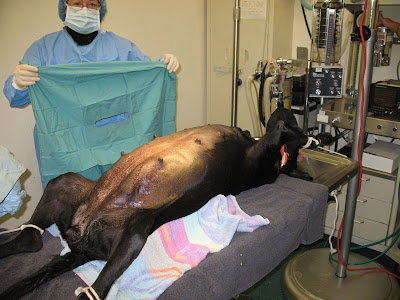 My tech, the kennel worker, dog owner and her friend stand by to receive the pups. 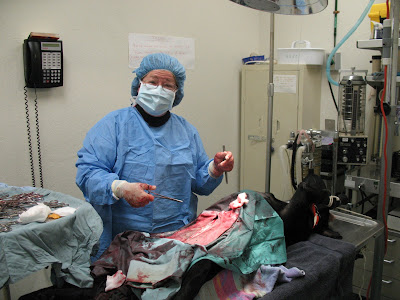 In the mad rush to attend to and do everything for the neonates (newborns) , intra-op pictures were neglected! So you get to miss seeing the huge, distended, pup filled uterus and all of the associated fluids. So Sorry ;-) Here I am closing up her abdomen, much less distended! 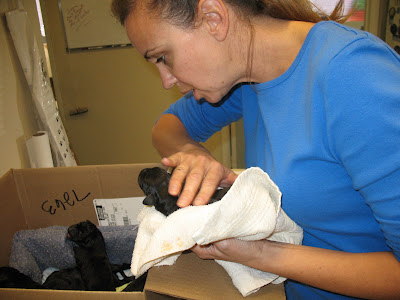 Puppy's human momma, placing a squealing, squirming newborn in a warm box of sisters and brothers. Such a sweet sound to my ears, hearing all of the puppy cries in the treatment area while I was working on mom. 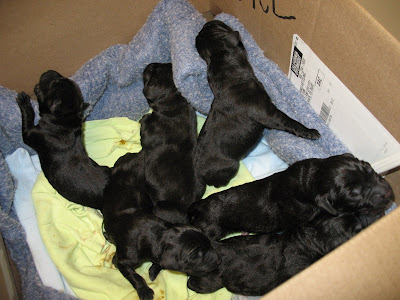 I removed eight (yes 8!) large puppies from the uterus. The crew did an awesome job of stimulating, cleaning and caring for all of them. Three were tough going, the tech did an outstanding job and even got the 'stuck' pup breathing. Eight out of eight ... not bad! 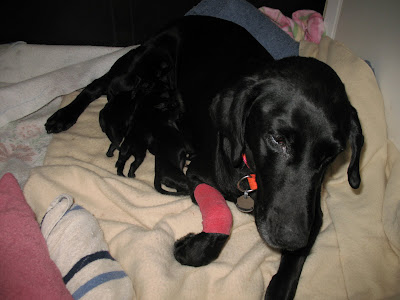 Now the poor old gal has 8 weeks of motherhood ahead of her. She looks just thrilled about the whole deal.

It was a great way to start a very busy day at the office.

Awesome! Thank you for a peek into a day at the "office."

Momma dog does look pretty out of it...I know that feeling all too well. But I'll bet she didn't get a morphine drip. :P

Good job Doc! looks like you had quite a morning. How long did all that take?

She got some goodies similar to morphine jenn... but she had to be alert and awake enough to care for the new crew.

Di, took about 1 hour from open to close. And the with-pups picture was taken about an hour after she woke.

(*whisper* Di, check the post date next to the time)