I hadn't seen the knee injury yet, Wrangler's leg was wrapped when we picked him up and I wasn't sure what would be found under that bandage. I didn't have to sedate him for the unveiling, he stood quietly as I unwound that first layer. The second layer, closest to the skin was stuck to his leg with dried blood and serum, a bit uncomfortable for him until I soaked the bandage with warm water to soften the adhered gauze and was able to slip it off almost pain free. 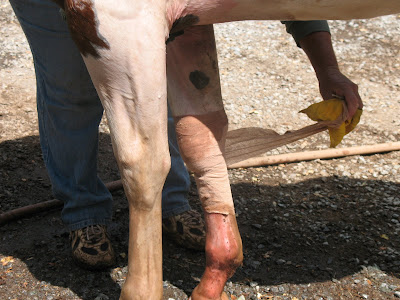 The following picture shows the condition of Wrangler's knee and leg injuries after the bandage came off. Skin edges dried, flaps of skin hanging barely attached, and underlying tissue exposed. 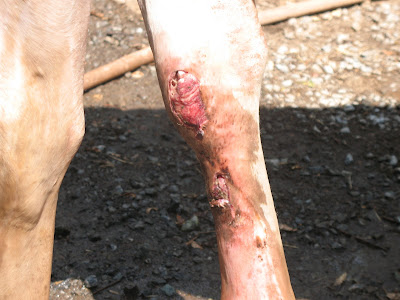 These injuries needed thorough cleansing before I could further evaluate and make a plan for repair. He stood better than I expected for the water flushing of his leg, just a little dancing around and nervousness. 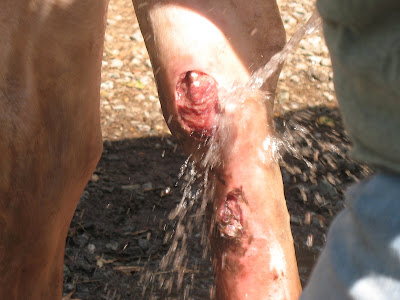 Another look at the leg after hosing. A large chunk of skin missing and when he flexed his leg it gaped open even wider. Both lesions look deep and I was worried about joints and tendons being involved. Infections involving those structures in horses can be very bad news. 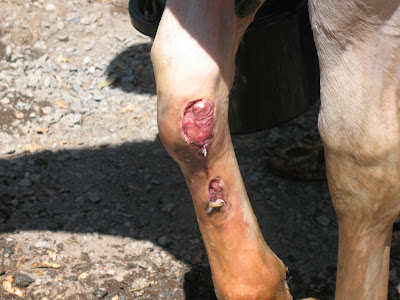 The next step was to sedate the colt. Standing sedation; the result is a calm, quiet patient who feels little pain. I further reduced the pain factor with injections of local anesthesia right into the area I'd be working in.

My photographer apparently took a break and didn't get photos of my gloved fingers deep under his skin.

The unknown force causing this trauma not only ripped away portions of skin, it also pulled away large areas of attachments of skin to the underlining tissue, leaving large pockets. As far as I could determine, the joints of the carpus and the tendons near the lower area were not involved.

My concerns were infection, closing the defects and minimizing motion of the leg. The lower laceration would be fairly simple to close, not much skin was missing. The upper one was more of a challenge. There is a limited amount of skin on a horse leg, and with this particular injury, there was much more area to cover than there was skin left to cover it. Complicating that concern was the fact that I had to trim away, or debride, the wound edges that were already dry and black, dead tissue. I scrubbed the entire area with surgical scrub and multiple flushes.

A very vascular area, there is quite a flow of blood as skin edges and destroyed tissues are trimmed. My daughter-photographer resumed photographing and I have scores of very artistic bloody horse leg pictures. 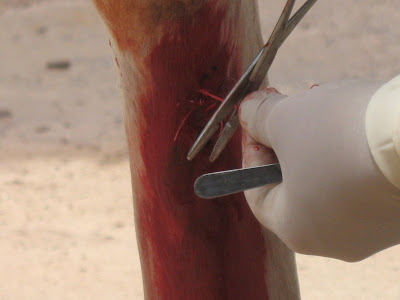 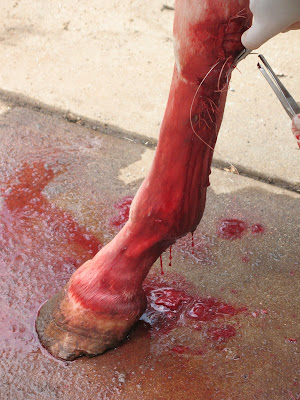 suturing...... completed. As you can see, I was unable to cover the entire area with skin, which provides the best healing, but was not possible. Things are just kind of tacked together as best I could. Disappointing results but better than leaving open and loose. 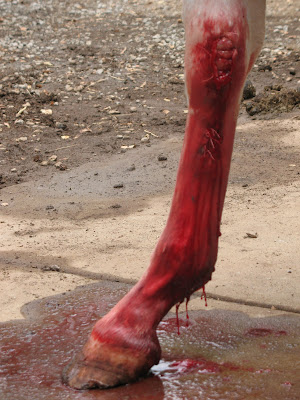 For some reason my photographer was really into blood and drips and clots.
Reminds me of a story: When I moved back to Michigan and started a mobile Equine Practice, my brother enjoyed coming along on my emergency calls. He's a faint hearted kind of guy when it comes to needles, blood and guts, so I still am not sure why he liked to come along. One particular emergency involved a horse's lacerated rear leg, bled lots, big mound of clotted blood on the gravel drive behind the horse foot. Brother says the big mound of clotted blood is gross so he kicks a bunch of dirt over it. Barn dog comes nosing around, finds big mound of dirt covered blood clot and dives in slobbering and smacking as he devours the mess. Brother starts gagging and retching and almost vomiting. I'm still laughing at him at this moment.... 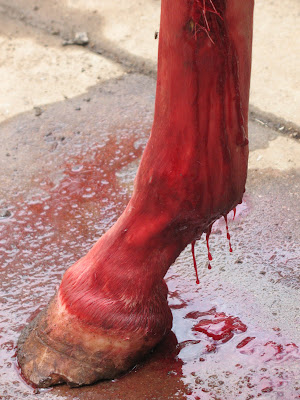 After hosing away the blood the leg looks much better. It will still take a long time to heal. Antibiotics twice daily to control infection, antiinflammatories to reduce swelling and pain medication. So much for my Free Horse. 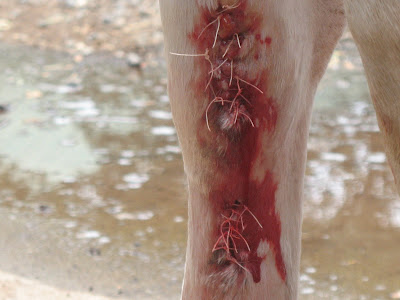 Every time Wrangler moves the leg, the joint flexes, which puts additional tension on the sutures. A thick heavy bandage is applied and Wrangler will spend the next 3-4 weeks confined to a stall wearing leg bandages. 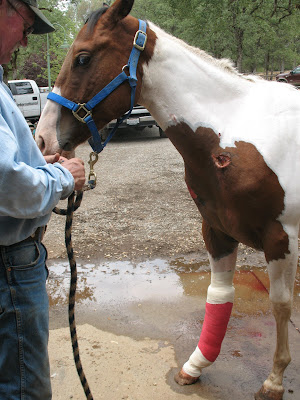 That's just the beginning, next I'll share the repair of Wrangler's shoulder.
Or maybe I'll share our dusty trails, camping and riding this past weekend.
Summer has gone by entirely too fast.
Good night.

Your photographer has quite the eye for the artistic dripping, bloody leg! He tore that knee up pretty good...and it always amazes me what you can do with scissors and sutures.

Summer did go by FAR too quickly! I'm already starting to feel depressed that the sun is going down earlier and earlier every day and I get less and less time out playing with the ponies. I feel like I'm in some kind of race against the daylight every evening. *sigh* I need some lights in my arena!

whew!! yuck, that's all, gotta go control my gag reflex!! i was warned..

WHAT no pictures of Cort eatting up YUMMY blood clots? GAAAAAG. Yep I remember at day. The Grosses thing I have ever seen. I do miss the late emergency calls. That poor baby sure did get beat up good. But now he's in the best of hands.Keep all the stories coming.

If he was a human we'd send him to plastics for a skin graft. Do you use xenaderm vaseline gauze? What do you think happened to him?
Was he with other horses that might have been biting him?
Blood doesn't bother me, your preaching to the choir.

He is lucky to have been put into your keeping. Best vet there is. Seems you could take patch of skin from some other part of him , to use on leg and chest. They do that with humans.
So sad, poor young guy.

More amazing photos. They fascinate me. Thanks.